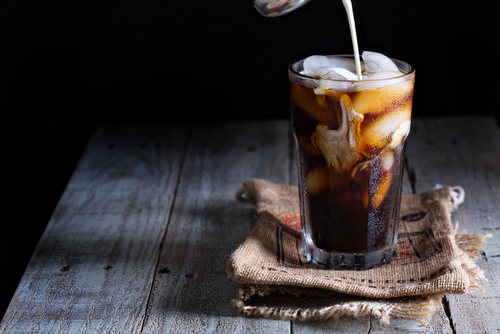 Fitness has been going well, but my weight loss has not been as intense as I was expecting based on the amount that I was working out. Common knowledge says that you can't really look at the scale when you get in shape because muscle weighs more than fat. But still, something was holding me back and I could feel it. While my diet was generally very good, I felt like I still had the parking brake on. I knew what it was: sugar. It's been my Achilles heel for a long time now. So I set myself a goal of a four week sugar detox. However, in the middle of those four weeks was a trip to Italy, so I decided to break it up into two parts - two weeks of sugar detox both before and after the trip to Italy. In a brief moment of resolve, I thought I would continue the sugar detox in Italy, but I sort of knew that I had to put sugar in my cappuccino and I had to allow some room for gelato in my diet, so I decided Italy would be a little break.

One of my favorite parts of the day was having an iced latte with simple syrup after Rocket's morning walk. In my more indulgent days, there was some sort of sweet in the afternoon. Sometimes it was a Coke Slurpee. Sometimes it was ice cream. It usually started as a once a week thing, and then slowly there were more reasons to indulge and eventually it would get too frequent. I had some smaller indulgences as well - I had started putting honey in my protein shakes when I made them for friends and that slowly morphed into me putting honey in my protein shakes all the time and slowly more and more. And my last big problem was the ever-familiar soda with every meal. So I knew I had those major habits to conquer.

The first couple of days were really not hard at all. As with most things, you start with gusto and motivation and it seems the sky is the limit. However, two days into it, I started having strong sugar cravings. It didn't matter what it was, I just wanted something sweet - an iced latte, a chocolate croissant, ice cream, whatever. I knew that this was going to happen sooner or later, so I just reminded myself that the first week was going to be difficult but that the cravings wouldn't last. As my trainer says, it's a matter of consistently making good choices.

I reacquainted myself with buying fruit in season. I had completely forgotten that blackberries were at their peak at this time, so I started buying blackberries, watermelon, and apricots to have on hand for an occasional snack. Since thirst can often disguise itself as hunger/cravings, I tried to make sure I was constantly hydrated. I took cravings as a sign that it's time to have a big glass of ice water.

Near the end of the first week, I realized that the intense cravings had pretty much disappeared. I started to become aware that at some point I was going to be done with the detox and needed to figure out a system for limiting sugar intake in my non-detox life. What were my permanent habits going to be? Was I going to give up sugar entirely for good? I had decided that I was going to allow myself simple syrup in my morning coffee and dessert once a week. I was still really missing the sweetness in my coffee.

One minor irritation started happening around this point: if people found out I was on a sugar detox, they started lecturing me about all my food choices. For instance, I had a beer with dinner and a friend started in with the "Aren't you just replacing one vice with another?" And telling me how alcohol is really sugar. One beer. And it was a light beer at that. I really hate it when people do this. I tend to think I've historically had a hard time with my diet because I take these all-or-nothing approaches and try to clean up any and all bad eating in one swoop and it always ends in misery, then helplessness, then binging. Focusing on long-term diet success by conquering one habit at a time has been much more beneficial for me and it allows me to realize that as you achieve one goal - no matter it's size - you then have the confidence to go on to the next goal.

At the end of the two week detox, I realized I didn't miss sugar in my morning coffee at all anymore. My tastebuds had become completely accustomed to not having sweetener. I realized that I wasn't going to go back to putting sugar in my coffee. There was literally no difference in my experience. I also noticed that I had a lot more consistent energy levels. I broke personal records at FlyWheel. I felt like a million bucks all the time. I lost 3 pounds off the scale.

So there's no doubt that's quitting sugar was a great idea and after one week, the cravings more or less disappear.

I've committed myself to another two week sugar detox when I get back to NYC. I've also decided to add one more thing to the mix: Facebook. A long-term friend and mentor knew I had the first sugar detox. He strongly suggested I do both a sugar and Facebook detox next. I must admit that I'm more scared of a Facebook detox than a sugar detox. There's a lot that I like about Facebook - staying in touch with friends, seeing photos, cute animal videos, some of my friends are very funny, etc. There's a lot I don't like about Facebook and I kind of feel like I don't even need to explain it.

So how to detox from Facebook? Obviously, I have to turn off all notifications for Facebook. I have to not have a Facebook browser window open in the background. I've decided to take a lesson from dog training. One of the ways to get a dog to stop a bad habit is to train it to a queue, then simply stop calling the queue. So I'm setting myself a goal of 30 minutes of Facebook time, three days a week. That allows me to stay in touch with people and post whatever, but it stops Facebook from being an ever-present force in my life. Instead of it being a mindless habit that I constantly turn to, it's a decision and a task.

Similar to going for fruit or ice water in place of sugar cravings, I need something to replace my Facebook addiction. I check my phone a gazillion times a day and I'm going to have to replace that habit with something more productive. I have my Kindle and just started reading American Gods, so I suppose I will get used to reading a few pages throughout the day when I'm waiting in line or on the subway. Or maybe I'll just meditate. Or daydream. Or hum. As I write this, I'm realizing that it's actually quite freeing to think I will have all this mental activity with which I can do whatever I want.

These detoxes are great in that they make me feel in control of things and I've spent a lot of time in my life feeling helpless against bad habits or even helpless against inertia. I'm always surprised how these relatively small habits - like adding sugar to my latte - can make the difference between feeling great about how the week is going and feeling like I'm struggling to keep up.

Time for a Dietary Change
I've just gotten sick for the third time this winter. It's time for a change to the diet. At this point last year I was still on my high from India and was not eating any meat. And I didn't get sick once last year!
Raw Food
My friend, Renee, has been talking about raw food restaurants here in New York. She turned me on to one in particular, Pure Food and Wine. There's a little blurb on their website describing raw food.
Resolute
I just looked at my blog page. My last entry was November 19th? Yikes!