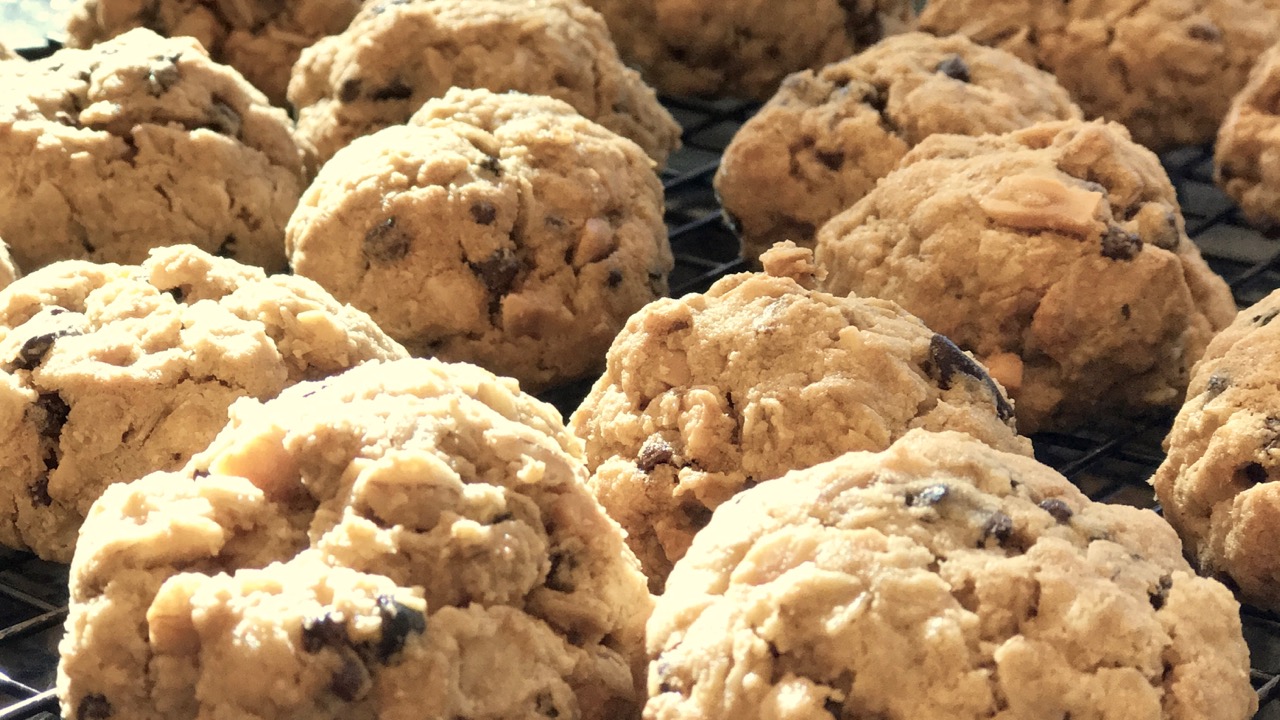 My trainer has developed an addiction to a product called Alyssa's Healthy Oatmeal Bites. I don't know how many of these he goes through per day, but I suspect it's a lot. He originally found them at GNC, but they have since stopped carrying them. He tried ordering them directly from Alyssa's website, but they were back-ordered for quite some time. He has spent a few too many times calling GNCs in the area trying to find anyone with some of Alyssa's cookies in stock. The inevitable finally happened: he was stuck with several days without any of Alyssa's Healthy Oatmeal Bites.

I had been telling him that he should learn how to make them because they couldn't be that hard to make and you could certainly save some money. When he hit his cookie-less crisis, I googled low-sugar cookie recipes and found something that had to be similar to Alyssa's. The first batch was good (he ate all 20 within three hours), the second batch was better (and I portioned out the batch so he didn't get them all at once), and the third batch was the best yet. It takes me about 30 minutes to make a batch of 20 now. It's certainly not labor intensive.

I'm waiting to get some chicory root fiber and I'll try the recipe again without any sugar at all. I'll let you know how it goes.

Place the coconut oil, sugar in a bowl and whisk until well combined. Add the egg, egg white, baking soda, and salt and whisk again until smooth. Add the almond flour, oats, and whatever flavorings you like. Stir with a spoon or spatula.

Let everything sit while you preheat the over to 325F.

Spoon out the cookies and roll into little balls. Place on a silpat or parchment paper lined baking pan.

Bake for 15 minutes or until golden brown. Let the cookies cool for 10 minutes on the pan.

This is the fun part. I aim for a ½ cup of nuts and a ½ cup or fruit. But you can adjust as necessary.

By far my favorite flavoring.

Put the cherries and almonds in a food processor and pulse until the almonds are in small pieces.

Put all the ingredients in a food processor and pulse until the walnuts are in small pieces.

Place the nuts, banana chips and dried pineapple in a food processor and pulse until the nuts are in small pieces.

Put all the ingredients in a food processor and pulse until the pistachios are in small pieces.

If you find a set of flavorings that you like, please let me know.

blog comments powered by Disqus
Related Posts
Ultimate Chocolate Chip Cookies
Here it is! The truly great chocolate chip cookie recipe. Rumored to me to originally have been the template for the cookies sold by one of those fancy New York Department stores. I can't divulge my source (mainly because I don't remember it), but here it is, pared down to workable size for you to enjoy!
Key Lime Pie